Public relations and inbound marketing share many of the same core concepts and one of particular importance is the sharing of information. Information sharing and how it spreads commonly follows one of three models that examine where information originates from, who receives it, and how many people are involved on each end. 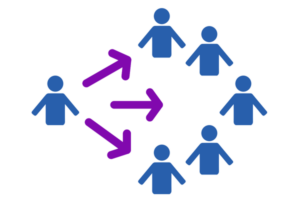 One-To-Many: is the type of communication commonly found in ‘old’ media such as print, radio, and television. In this type of communication, a single source provides information to multiple receivers such as a commercial on a nationwide (or local) news broadcast, a newspaper article, or a book just to name a few examples. 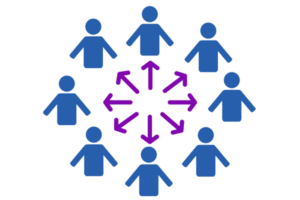 Many-To-Many: in this model where information is generated from multiple sources and is received by multiple sources. The Many-to-many information sharing is often found on modern networked platforms such as social media and other internet-based forms of communication. An example of this would be several different people speaking about a current event of cultural importance in social media and these statements being shared and responded to by another different group of readers. Note that there is no core singular source where this information sharing begins as several people start sharing information (often the same information) wholly unaware and independent of others’ statements. 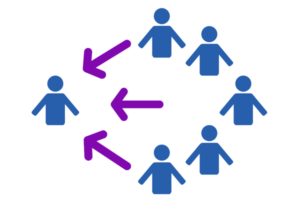 Many-to-One: is the reverse of one-to-many. In a many-to-one model, several different points of information are received by a single reception. An example of this is would be a company sending out surveys to its customers or reading feedback on their social media accounts. Many-to-one information sharing is highly useful as a feedback tool and far easier to access in the modern world due to networking allowing multiple real-time responses.

When considering modern information sharing it is important to understand that technology-based networking has become a key form of communication in the modern world. Traditional networking (such as business relationships) can use technology but don’t require it. Technology-based networks (forums, social media, etc.) use the internet as a communication platform. Users then use internet-based networks to create new personal networks around common interests, professions, worldviews, and other common traits. A key trait of Internet-based networks is they allow anyone to transmit information and they also allow the use of any of the three above mentioned information sharing models.

PR In A Networked World

As a PR or marketing professional it is important to understand the scope of how networks have come to define information sharing in overall society. Despite being a very useful tool and giving you access to more potential readers or viewers than ever before it has created unique challenges. First among these is the signal to noise ratio. The average person is bombarded by more media in a single day then they can realistically read and it takes a unique approach to break through the noise. Second people are increasingly tribal getting their news and interacting with others who share their opinions, interests, and worldview. Therefore, it can take particular effort to reach certain target markets as they may actively ignore certain platforms, no matter how popular they may be, due to whom they associate with.

The Importance Of Adaptability

Adaptability has become more important than ever. In that respect make use of these interconnected networks but also be aware of which ones are the correct ones to best reach your desired audience. Also, never miss the opportunity to use these networks as a feedback tool by becoming the one in the many-to-one-model as it allows you to respond and adapt very quickly to a quickly changing world.

On Linkedin you post an article, this is an example of one-to-many. Feedback from readers is many-to-one. Also, readers talking to each other are having a many-to-many discussion. Such a multifaceted sharing of information wouldn’t be possible without modern technology. However, you have to be attentive because it’s easy to lose control of the conversation. Two indirect strategies to get your message out include asking questions of your readers and answering reader questions. A more heavy-handed black and white approach only invites disagreement as shades of grey viewpoints are the standard in large public forums.

We are hosting the 2018 AI Unconference at Gerrards Cross. The whole point of the unconference is to turn the 1 to many of a traditional event into a many to many educational format.