McQuaig Word Survey – helping in the hunt for the creative head 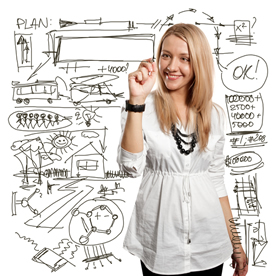 We recently came across this anecdote about how a leading toothpaste brand got its sales soaring. The company had apparently been going through a rough phase, and the management called a meeting asking the employees to come up with new promotional ideas. When all kinds of run-of-the-mill ideas flooded the table, one bright idea that made all the difference came from a new recruit.

He suggested they widen the mouth of the tooth-paste tube slightly – that way people will end up using more toothpaste, as most of us never bother about the quantity of toothpaste as long as it covers the toothbrush!

Well, that in a word is creativity – ‘the’ creativity that every organisation probes for when scanning through the piles of CVs inundated with the clichéd ability to think out of the box.

We have discovered over the years that this creativity thing can come disguised in just about any shape, size or form, and speak any language and bear any surprising range of qualification, skill or experience. And we are happy to say, at IMRE we have quite an assortment – and with all our differences, we are proud to have one thing in common – and that is a passion for creativity.

For a highly competitive industry like ours, creativity is as important a requirement as technical ability. But, the hitch here, as always is – ‘the balance’. The highly technical people are sometimes so caught up with the technicality of things that they fail to look at the creative side, while the purely creative types focus so much on aesthetics that it can be difficult to put their ideas to life practically.

In Steps The McQuaig Word Survey

This is where we have to thank our client The Holst Group for the McQuaig Word Survey – a psychometric test which has always come to the rescue when we have found ourselves sifting through a huge flock of earnest candidates, all claiming to fit the creative bill in their own rights.

People do have differences in opinion about psychometric tests, as it is a statistic tool and does naturally have a margin of error. But, we feel if used rightly in conjunction with the interview and suitable screening processes, they are really handy tools that can help in eliminating biases, which can often occur if you carry out an interview alone. As psychologist Jon Gowlland of PsyScope puts it, these tests can help in “capturing the long-term personality rather than the short-term charm that turns up at the interviews.”

Both types of creativity are valuable here at Imre. McQuaig Word Survey helps us understand an employee’s natural strengths so we can nurture and develop them. And, when used as part of a competent screening process, this we think is the nearest you can get to knowing how likely this investment of yours is to bringing in the returns.

Right from primitive forms of fitness tests used by Chinese emperors as early as 2200 B. C, to the more structured anthropometric tests developed by Sir Francis Galton in the 19th century (influenced by the theories of individual adaptation and survival propounded by his cousin, Charles Darwin) and the latest standardised versions of scientifically approved profiling tests, psychometrics apparently has a long history in the recruitment process.

And today, as recruitment only gets tougher, psychometrics can definitely provide a direction, if not the final answer.

Video: How to read a McQuaig Word Survey graph – If you’ve ever wondered what a psychometric test analyses you should check this out.