Tell *Auntie to shut up!

A year ago the BBC was full of the “R” word. Recession, gloom, doom and generally bad news were all the negative pointers going forward. If we had listened to the Beeb we should have packed our bags and we should have just given up. Our own research of a year ago painted a different picture, and we survived 2008.

What about 2009? Well, we have a new letter for the year that introduces the “D” word, deflation. But what does deflation for mean for us? Our sector? UK? Zimbabwe? India? China? Europe? Prices dropping as people hold back on spending and economic hell?

Last year I found some graphs on the Netcraft website which provided a view on where the internet was heading. I have put last year’s image and this year’s graph side by side. 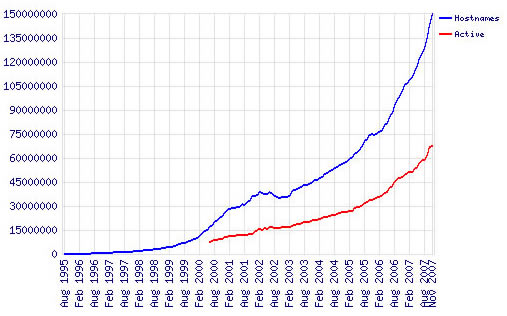 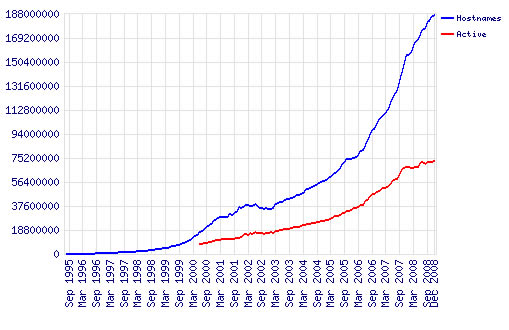 Last year the curves looked exponential, this year perhaps we can just about spot a levelling off. Before we all jump off a cliff, perhaps we should just put the following number into perspective. The number of websites that responded to the Netcraft survey was 186,727,854 with a growth of 1.56 million sites in the last month alone. Follow this up with some simple maths and we can assume a 25% year on year growth. This has deflation, recession and a slowdown of activity written all over it, right?

Diane Morrison, based upon Neilsen data, suggests that UK mobile internet usage is growing at 8 times the wired usage rate, rising from 5.8 million to 7.3 million.

The EMarketeer is projecting steady year on year internet usage growth all the way up to 2012.

According to the Office for National Statistics internet sales rose by 30% in 2007, the first part of 2008 showed even better figures.

After considering all of the above, are we still in the deflation camp? What other wisdoms can we garner from Google searches?

In my view there are many positive ideas here. Instead of letting the Beeb fill our heads with terminal decline, we can actually find somethings that are moving ahead.

The messages that I am picking up are all about change, focus, efficiencies, innovation and taking action. If a herd of bulls are stampeding towards you, what are you going to do? It is human nature to get an adrenaline rush and to take action. The broadcasts from the media would have us believe that we are all like lemmings and that we should all just follow each other into the depths of an uncomfortable place.

Now is the time for action, you can start by turning down *Auntie’s volume.

*”Auntie” is an affectionate name for the BBC

P.S. I do like the BBC. But in my view some of journalists do enjoy the misery a bit too much. (eg. Mr Robert Peston)